reflections at the intersection of theology, culture, and the quotidian 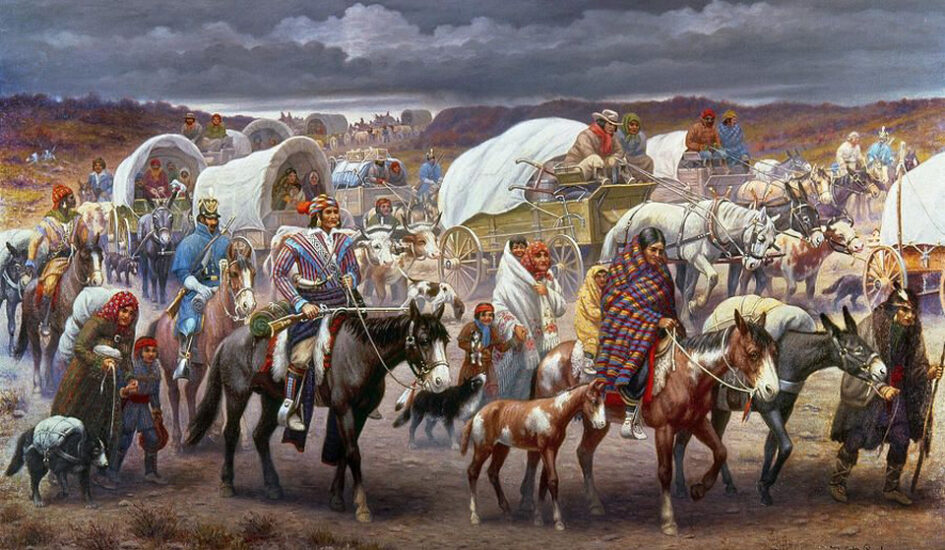 Last week, our history curriculum brought us to learning about the removal of five Native American tribes from the southeastern states to the Oklahoma Territory. As a supplement, Reuben has a book of primary source material that I use for his copywork, grammar studies, and dictation each week. The material that matches up with our lessons for last week was from a speech given by President Andrew Jackson to Congress. In it, he happily reports the conclusion of the government’s policy to remove “the Indians beyond the white settlements.”

The rhetoric is appalling. He justifies his covetous and wicked actions through claims of benevolence and generosity. He treats the tribes as children, unable to know what’s best for themselves, and congratulates the U.S. on developing a policy that would be the salvation of the “wandering savage.”

Today, as we continued to read a fiction story about a Cherokee girl forced to leave her home and travel westward, we read about the cruelty of the soldiers who herded her people into a barricade. Oliver asked, “But that’s not us, right? But are we Americans?”

How do I faithfully convey distance and time and heritage and honesty and wickedness and failure and great, great sorrow? One way, I hope, is through reading the stories that we are — to help my children put themselves in the shoes of someone who does not look like them, but whose humanity is beyond question.

Another way, as I’m learning from others, particularly Soong Chan Rah, is to practice and model lament. This morning I stumbled through a prayer with my children. This afternoon I sat down to compose something we could use together as we continue to be confronted with the past, and refuse to distance ourselves in a way that quickly washes our hands of the sin of our forefathers.

O Lord, maker of heaven and earth, you have made us the crown of your creation,
Your image bearers and stewards on the earth.
And yet we have chosen not to reflect your image;
We have chosen to rule in ways of wickedness and injustice.

Lord, we lament the suffering of the Cherokee, Creek, Chickasaw, Seminole, and Choctaw tribes.
We mourn their forced removal from their homes, the disease, sickness, and destitution which they suffered.
They bore your image, men and women and children created by you, known by you and not strangers.
You knew them, and you heard their grief and their wailing.

Lord, we know that you are a God of justice,
And so we entrust all of these to your judgement —
Cherokee, Creek, Chickasaw, Seminole, and Choctaw tribes,
Their descendants,
Those who drove them away from their homes,
And our government today.
Judge rightly, Lord, we pray.

And Lord, see the sin that is in our own hearts,
The covetousness that looks with greed on the good things you have given others,
The arrogance that believes we are better than another,
The blindness that thinks our own sin will escape your fire of judgement.
Show us our sin and do not abandon us, we plead, O Lord.
By the power of your Spirit root out our sin,
Cleanse our filthy hearts,
And grant forgiveness in Jesus’ precious name.

Theme by Anders Noren — Up ↑