reflections at the intersection of theology, culture, and the quotidian

Ricketts Point Marine Sanctuary is on the bay, close to our house. Most of the bay coastline from Melbourne down to Point Nepean is sandy beach, but at Beaumaris beach, right at the beginning of the smooth curve down to Frankston, rocky shore replaces sand.  The rhythm of high and low tides covers the rock, and then exposes it, leaving a small amount of water behind in rocky pools. This harsh environment of wet and dry, protected and exposed, far from being barren, is full of creatures designed to survive the daily fluctuation.  On the higher parts of the shore, red algae forms a pink crust along the rock. In low patches of rock, wide, shallow pools housed thick rugs of seagrass.

This week, the kids and a couple of friends joined a Parks Victoria program to explore this intertidal reef. The Parks Victoria ranger, Julia, led us out from the parking lot, down to the beach. The kids and their parents fanned out as we reached the rock pools, but Julia soon called us back. As we gathered close to her, she passed around a small handful of this seagrass. She pointed out to the water, where a small group of birds swam, necks in the water. They were obviously swans, but I had never seen black ones before: these graceful birds were striking with their black feathers and orange bills. Julia explained a part of the food chain in the intertidal zone, in which these swans eating the seagrass played a pivotal role.

Bending over, Julia picked up a piece of a plant strewn all over the rock shore. Its color  was a washed-out olive green, and it was segmented into beads. “Neptune’s Necklace,” she said. Showing us how they stay alive during low tide, she squeezed one of the beads in between her two fingers: a stream of water squirted out. “Oh yeah,” said one of the boys, a curly-haired know-it-all, “I do that to my dad all the time!”

Julia promised a prize to the first one to find a crab, and the kids quickly scattered to search. After a couple of minutes, Gideon, carefully lifting up a rock, called out that he had found one. I bent over to look, but all I could see was mud. Reuben’s eyes were better than mine; it was only after Julia picked it up that I finally saw it. She turned it over, and, indicating the small triangle shape on its torso, identified it as a male crab. “Females,” she said, “have a half circle instead.”

Next, she showed us the difference between types of snails, first finding one with a round-shaped shell. She compared it to a salad bowl, explaining that shells shaped like that were for herbivores. Carnivores had eye-shaped shells. She picked up a carnivorous snail, and a small clam shell, the most typical kind of sea shell found on the beach. She pointed to the small, perfect hole — the hole perfect for threading a string through to create a necklace. What I had assumed was a random circumstance to the clam was actually the means of its death. The carnivorous snails use their siphons to drill a hole into the shell of its prey, squirt in some acid to dissolve the creature, and then suck it up, “Like a smoothie,” the ranger explained. The boys grinned. 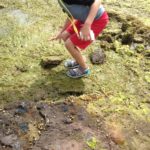 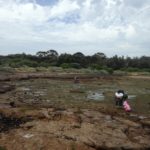 In Genesis 1, the Lord appoints Adam and Eve as stewards over creation; in Genesis 2, the Lord brings the animals to Adam to name. The two are not unrelated: to care for something faithfully, it must be known relationally, not in the abstract. Names, personal names, invite us to know and to care for. Without them, creation remains ambiguous — something to view and experience, not be responsible for. 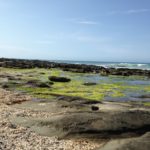 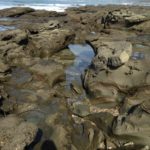 All around my house are plants and creatures that are unfamiliar to me. I am a newcomer in a new climate, a new hemisphere. I have not grown up with their names, have not been taught to recognize them and appreciate them for their unique beauty and  place in this world. But their unfamiliarity, rather than an excuse for ignorance, is an invitation to name and to know, and to live more fully and faithfully in this particular place where God has put me.

Theme by Anders Noren — Up ↑